In November 2016 we had published a research note “Stocksnips Sentiment Analysis Research” where we examined whether News Sentiment was a leading indicator of stock price changes. That study was limited to a single stock AAPL and the results were promising. We have now extended our research to cover a larger number of stocks and two years of historical data. In this paper we report our findings which demonstrates the construct validity and reliability of news sentiment. Overall, the Stocksnips sentiment signal (V3) provides statistically significant (p < 0.01) increase in stock price correlations – using better message weighting and attenuation heuristics

1.0 Background
Alternative data sets – in particular stock sentiment signals – have been widely mentioned in the financial industry over the past few years. While sentiment is expressed and understood normally as a % positive indicator (whether at the stock ticker or ETF or Sector level), the manner in which these signals are derived is vastly different. Examples of the data used to derive sentiment include the following:

To summarize there are numerous “sentiment” signals being used in the financial industry but each of them measure something different – i.e. they are not really comparable. Furthermore, the reliability and construct validity of such signals is unclear and opaque due to the nature of the data collected and the inherent challenges to ensuring a meaningful sentiment signal (regardless of velocity and volume factors).

2.0 Stocksnips News Sentiment Signal
Stocksnips has developed an AI based News Sentiment estimation system which uses news articles from established sources and asserts the sentiment of each financially “oriented” sentence within an article. Using AI driven attribution and Machine Learning models trained with large labeled data sets specifically developed for financial sentiment – the Stocksnips AI engine is unique in terms of both its approach and rigor. The aggregate value of news-based sentiment assessed at the discrete sentence level using the financially trained AI model, from reputed news sources, can a-priori be expected to be less “noisy” and possibly less “biased” versus social and other types of sentiment signals.

Assessing sentiment at the snippet level is only the first step in the process of generating a sentiment signal.  The industry standard practice would be to compute a simple ratio of Positive Count divided by Total Count of snippets for a ticker (or possibly the positive score/total score). We note, however, that “Count” of snippets is a “discrete” variable.  Furthermore, we know small stocks do not have as many articles resulting in lower number of snippets. The distribution of such counts is “non-normal” due to this low frequency.  The distribution of snippets is more like a Poisson distribution with lambda = average snippets/day < 1.  However, the Poisson requirement for independence of events (if these events occur with a known constant rate and independent of the time since the last event) – is unlikely to be true – which is generally true of many real-life situations.  This type of occurrence where events occur in clusters could also imply “auto-correlation” – in which case the Poisson process could be modeled using Markov chains.  Other factors to consider when creating a sentiment signal include the following:

Using traditional indicators such as 7 Day moving or 30 day moving with such discrete data (at the ticker level in particular) is clearly problematic especially where “lambda” or the mean snippets per day is small or has low frequency and from a statistical perspective “reliability” and “construct validity” need to be reviewed and addressed.

3.0 Assessing Signal Reliability
To review the performance of the new sentiment signal, we assessed two key aspects: (a) reliability, and (b) construct validity – as further explained below.

4.0 Sentiment Signal Study Results
Stocksnips conducted a study to assess the reliability of its sentiment signals using a randomly selected sample of 629 tickers from its database of 3,000+ tickers with sentiment information. The study period covered from August 2016 to September 2018.

4.1 Definitions
A few key definitions used in the analysis include the following measures:

The above measures were used for all correlation calculations in this document.

4.3 Ticker Sentiment Reliability Analysis
The intraclass correlation coefficient (ICC), is a statistic that is often used to measure “reliability” of a metric. Conceptually, reliability for a quality measure means measuring the same data twice and detecting the “reliability” of such scores.

The ICC scores ranged from a low of 0.34 (for 7 Day % Positive measure of sentiment) to 0.63 for the V3 model with message weighting. One can also observe a significant reduction in daily sentiment variability with V3 (which if construct validity is unchanged would suggest a more reliable measurement) and much higher ICC – indicating higher reliability of this measure versus the other two sentiment measures.  Since the sentiment scores are being compared across time periods (within effects) the assumption of similar measurement across time periods need not be true – and hence the measured ICC may not be an accurate indicator of reliability.

4.4 Ticker Correlation Analysis
The correlation of % price change of a ticker (close price/50 day moving average price – 1) versus sentiment deviation (current day sentiment – 50 day moving average sentiment) was computed for each ticker to test for construct validity. The market cap weighted correlation across the 629 tickers was found to 0.23 (for version 3 model) versus 0.19 (for version 2 model) – which is statistically significant at p < 0.05 level. This 20% increase in correlation along with the reduced variability (or higher reliability) indicates that the new sentiment model is more robust and useful than the older model. 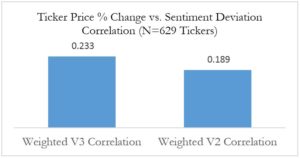 There is not a significant difference in the number of tickers which show a positive correlation with V3 at almost 74% while V2 shows 72%.  If the null hypothesis is that the sentiment signal is white noise, we would expect 50% of the tickers to show positive correlation.

There appears to be a clear difference in terms of some tickers showing negative correlation having a lower market cap and a lower number of snippets per day (lower amount of news).  The market cap weighted correlation for the 74% of positive only tickers is approximately 0.30 which is much higher than the overall average of 0.23.

Further analysis of market-cap impact shows that there is a significant decrease in correlation between price and sentiment for very small market cap companies (less than 0.30 Billion).  This is most likely due to negligible news other than quarterly SEC filings (which is unlikely to have any impact on price beyond the announcement window).

5.0 Sectoral Results Using V3 Sentiment Signal
With the observed increase in reliability and construct validity for the new version 3 message weighting model for sentiment, the model was applied to all 3,000+ tickers in the for all historical periods beginning in January 1, 2016.  This database was then mined to review correlations at aggregate – sector levels. Sector level closing price was derived by weighting each ticker in a sector with its market cap and the same was done with sentiment.  A few sector level charts are shown below:

All Sectors (All Tickers) 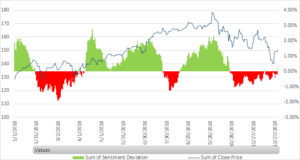 Above chart shows a clear correlation between market weighted closing price on the left axis and sentiment deviation (from 50day moving average) on the right axis. 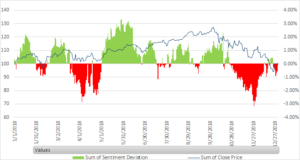 The technology sector chart also shows a strong correlation as seen above.
A summary of the estimated correlation (using 2018 trading days only) – for each of the sectors is shown in the table below. 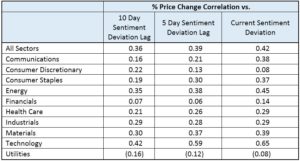 Overall market correlation with sentiment deviation is 0.42 – with the correlation dropping to 0.39[1] with a five-day sentiment deviation lagged and 0.36 for a 10-day lag.  Technology sector appears to have the highest sectoral correlation at 0.65 (possibly related to both the volume and velocity of news for this sector). The low negative correlation of the Utilities sector is unclear by may be related to the counter cyclical nature of these stocks.  Overall, the level of correlation for many of the sectors and total market is strong with a reasonable lead effect in some cases.

6.0 Conclusions
It is known that stock price is impacted by many endogenous factors such as earnings per share, market share, growth, etc. and exogenous factors including macro-economic factors, political events and “random white noise” events. Historically, and even today, prediction of stock price movement is inherently complex.  However, in a globally connected world there may be an opportunity for information arbitrage. Companies are tied to other companies and large conglomerates (such as Apple) can impact the performance of other companies.  If there is asymmetry in timing of information published by these interconnected companies, it is posited that such (news) information can influence stock movements. The results using the Stocksnips latest sentiment signal with optimized message weighting show (a) higher reliability of this signal (versus most other signals including social sentiment signals which are notoriously volatile), and (b) statistically significant correlation between sentiment changes or deviation and stock price changes. This effect is even more apparent at the sectoral level as is to be expected.  Including Stocksnips sentiment signal in portfolio allocation models and buy/sell models as an alternative signal is highly likely to increase “alpha” due to the findings mentioned in this report.